By “work” I mean my moonlighting at Columbus State’s Discovery Exchange this evening.  (Since this was a cost-savings day, the Industrial Commission was closed, and I slept until mid-morning, venturing out for a beard trim, and trips to Subway, the post office, and Kroger.)  Work at Columbus State’s bookstore began at 5:30, and I walked the nearly two miles from Weinland Park there.  The temperature has been above 40 degrees today, so I was quite comfortable in a hoodie for this walk.


The flow of customers is starting to pick up, and I understand it’ll be sheer chaos come Monday, the first day of classes for the winter quarter.  I’m finding Columbus State’s students to be much more likable than many of the students I met during my many seasonal stints at DuBois Book Store.  I think the difference is that the community college student has already experienced some responsibility and motivation in life.  Many of them are continuing their educations after raising children, many are taking night school or online classes while working 40 hours per week, and many are trying to get their GEDs.

My experience with students at the University of Cincinnati (and I played this observation to death, and not at all flatteringly, in my still-unpublished novella The Textbook Diaries) was that many of them were kids who enrolled in college because they learned that getting a job at Keller’s IGA or joining the Army actually involved work.  There was a bumper sticker popular at O.U. that said “College is a four-year party with a $20 thousand cover charge.”  There were more students living off campus than on, mostly with their parents.  It was easy to tell that some of them were just marking time before going to work for the family business.

It wasn’t until I worked at DuBois that I began to understand the meaning of the phrase “a sense of entitlement.”  When working customer service on the floor, I lost track of how many times someone would come in, thrust his/her class schedule into my face, and say, “Find my books for me.”  After the second or third time this happened, I politely but firmly explained how the shelves were laid out, where the course guides were located, and how to read the shelf cards to determine the required books for the courses.

While there were few customers on the second floor, in the textbook area, I took a cart loaded with buybacks so I could re-shelve them.  The books were on the cart in a pile, not organized in any way at all.  I took a pack of security strips (silver peel-off strips that resemble the gold strip that used to unwrap the cellophane on cigarette packs) and put them on the books, in inconspicuous places.  Then I’d walk around the textbook area and re-shelve the books in their proper places.  (Some were easier than others; the packets of software were the worst.  Some of the other buybacks were for popular subjects, so I’d walk by a shelf and see it crammed with the identical title, and I’d place it there.)

Once work ended and I came home, I had some chicken soup, and then came to the laptop and resumed the book cataloging project I started the other day and blogged about earlier this week.  I managed to do all the books in a milk crate, plus some of the volumes stacked outside it, and set aside three books that had no Library of Congress call numbers.  (Susie was in the other room working on her blog, and didn’t pay attention to her dad’s latest madness.  She’s long since gotten used to it.)

I don’t know whether I’ll buy a few rolls of the little library stickers and then try to organize all this once this endeavor is finished, but it is fun (mostly) to look at what I have and type it into the database.  Thomas Jefferson sold his personal library to Congress to replace the Library of Congress’ holdings.  (Most of the original Library of Congress was destroyed when the British burned Washington in 1814.  Jefferson was drowning in red ink–something he and I share, besides being Unitarian–and sold his personal library to pay off some of his many debts.  In reality, he used it to start a new collection of books.)  Jefferson’s intention was to organize his books based on Lord Bacon’s hierarchy of science, but he ended up shelving them by size.  (For more information, click here.)

Here is just a little of what I’m working with here: 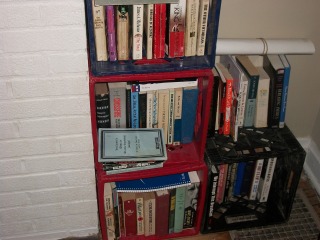