Typing once again from the sanctuary of the Olmsted Unitarian Universalist Congregation in North Olmsted, Ohio, on the west side of Cuyahoga County.  The kids have eaten breakfast and lunch, enjoyed morning workshops, worked and played hard.  There’s another activity going on in the common rooms and areas right now, so I’ve retreated to the comparative peace and quiet of the sanctuary.

The youth–with some flexible exceptions–are forbidden to be in this area; it’s an adults-only area, but some have poked their heads in to look for their sponsors to retrieve medication, misplaced belongings, etc.  The biggest incentive for keeping some of the more mischievous ones out of here is the rope that hangs from the ceiling just to the left of the front door.  It’s the pull rope for the bell in the tower.  With some of the more adventurous kids, I’m sure it would be a temptation.

Insurance companies introduced the concept of attractive nuisance when it came to liability about certain issues, and the aforementioned rope would be one here.  The bell in the tower above the front door (see picture below, which I shot this morning from across the street from the church) was used to signal the beginning of services, fire warnings, and tolling the deaths of members.  All in a day’s work for a church bell. 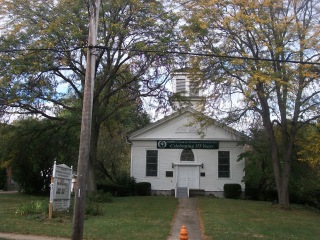 Exterior shot of Olmsted Unitarian Universalist Congregation
on Porter Rd. in North Olmsted, Ohio.  The stained glass
window I posted in yesterday’s entry is above the double doors.
Bell tower is partially obscured by leaves.
Looking at the exterior plaque, I see this congregation has occupied this building since 1847.
The attractive nuisance doctrine says that an owner can be held liable for injuries on his property, even if the injured people were trespassing, if he took no action to safeguard the nuisance.  The classic example is an unfenced swimming pool on private property.  If kids trespass on the property and swim there, and one of them drowns, the parents can still sue the pool’s owner, even if the child was trespassing.
I’m sure the kids here would find the temptation to ring the bell too attractive to pass up.  I’m not expecting any physical danger to come from it, although for all I know the bell wheel and housing are too weak to support sustained ringing, but if the kids know it’s there, I’m sure the “Hey, guys!  Watch this!” factor would kick in before long.
Whenever I mount my soapbox about something like this, I always try to come clean about when I’ve run afoul of this particular situation.  I was sorely tempted to own an attractive nuisance at one time.  In 1979, while delivering The Marietta Times on Front Street, daily I passed the long unused Harmar Railroad Bridge, which spanned the Ohio River and connected downtown with the West Side.  That spring, they opened the first section of the bridge to allow a tall barge passage down the Ohio.  It was a swing bridge; the first section was on a big lazy Susan, and when the bridge was opened, the first section was sideways, and remained that way.
The Chesapeake and Ohio Railroad, which owned the bridge, never got around to closing the first section, which was a pain for people who used it for bike and pedestrian traffic.  (I always used the pedestrian walk; I was too “chicken” to walk on the ties.)  There were rumors the bridge was for sale for $1, and I thought about emptying the Ball jar on my desk that was half full of pennies and buying the bridge.  One, it’d be fun to own a bridge; two, maybe I could sell the metal for scrap.
Dad told me if I did buy it, I’d have to buy lots of insurance, because if kids were playing around on it, and fell, or lost limbs, or gashed their heads, guess who’d be responsible in the eyes of the law?
I even have a past when it comes to bell towers as recreation.  For years, beginning at the age of 16, I had the run of the First Unitarian Universalist Church of Marietta, which was truly my home in Marietta.  The house where I lived with my dad, stepmother, and stepsisters was just my address.  I was immediately drawn to the bell tower, and loved watching parades from it.  (The church is on Putnam Street, which is the main west-to-east street in Marietta.)
I also enjoyed inviting my friends up there, making a pain of myself by saying, “Take only memories, leave nothing but footprints” very piously.  I was in no way put off by the fact that the roof’s hatch was open, and that when you reached the top of the tower you waded through an ankle-deep pile of pigeon droppings and dead pigeons.  (I volunteered to clean it, but Justin Lapoint, the minister–my mentor–didn’t want me ending up in the hospital with histoplasmosis–which used to be called spelunker’s disease or silo disease.)  I was thrilled by the view from the tower, a great place to watch people.  (On a rafter by the bell, I had written “Tower power!”)
The bell was beyond ringability.  The bell wheel was almost kindling, the pulleys were rusted, and the floor probably couldn’t stand the vibration.  The only time it ever rang was after the Iranian hostages were freed in 1981.  All the churches in Marietta pealed for that, and Justin, who had been at a movie at Marietta College when he heard them, went down, yanked the rope, and managed the weak “Ding!”  Anything else would have been too dangerous. 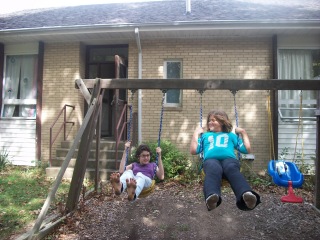 Susie (right) and her new friend on the swing set.