My friend Rich is visiting Columbus from Rhode Island, and it’s been a fine visit.  He last saw us in 2007, and at that time Susie hadn’t quite turned 10, Steph only had one heart surgery behind her, and Steph and I were still married.  Besides reconnecting and bringing each other up to date on our lives, jobs, and situations, yesterday he drove Susie and me to Southeastern Ohio.

The title of this post is, of course, from the refrain of the Simon and Garfunkel song “My Little Town” (1975).  The dead and dying were the reason for our trip to Marietta (and Caldwell) this time.  During the time that I lived in Marietta, until I was 19 years of age, I was “twitching like a finger on the trigger of a gun” to get out.  I periodically have to visit Marietta to realize why I left and why I never seriously entertain notions of returning.

Rich, Susie, and I paid our respects at one of the crash sites of the Navy’s rigid airship Shenandoah (ZR-1), which crashed in Ava, Ohio in 1925.  (I say “one of the crash sites” because debris fell over a 12-mile stretch between Ava and Sharon.)  Finding the crash site was an ordeal, and Rich’s car’s suspension suffered a bit as we bumped, spun, and climbed over the pothole-ridden and rock-strewn road off State Route 821 that led to the flagpole and stone that marked where the bulk of the wreckage fell to earth.

After lunch, our next stop was Olive Cemetery, final resting place of six generations of McKees (my mother’s side of the family), from 1815 (death of David McKee, a founding pioneer of Noble County) to my mother, who died in 2008.  There was the usual mad scramble to find McKees’ graves, because the Noble County recorder’s office had never returned my email about specific burial plot numbers.  I visited my grandmother’s grave quite a few times when I was growing up, but the visits to Noble County ceased once my dad and mother divorced.  Rich and I took Susie there when she was about two.

Now, at 13, she was appalled by the gallows humor Rich and I exchanged about our various reprobate family members, especially the classification idiotcousin he wants to put on his genealogical charts, and all the bad jokes he and I exchanged about the suicide of my great grandfather, Aaron McKee.   (Aaron took his own life in March 1906 by cutting his throat with a straight razor.) 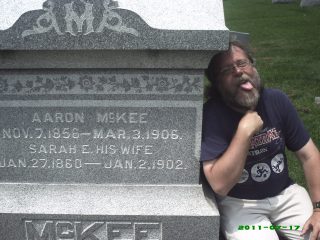 Whatever is the linear opposite of ancestor worship, here I am engaging in it.
Aaron’s suicide was grisly enough, but my grandmother, Lucie McKee, lied about it and made it even more gruesome when she told her children (including my mother) how it happened.  She told the kids (and this was the version I grew up hearing) that Aaron, three years a widower, hanged himself in the barn one night so that my grandfather, Lester McKee, would find his body when he came out in the morning to do his chores.
We never knew the truth about it until Rich found his obituary in the Caldwell Republican Journal.  The exact opposite circumstance was true.  Aaron arranged to meet one of his neighbors in an outbuilding on his farm one morning.  The neighbor came at the agreed-upon time and found that Aaron had cut his throat with a straight razor.  Quite the polar opposite of Lucie’s version: Aaron had arranged his suicide to specifically eliminate the possibility of his children finding his body.