There are hundreds of sights where customers can complain about bad customer service they’ve received at different stores, Websites, or help lines.  Equally, there are just as many sites where employees who work with the public daily can vent about the stupidity of the customers they encounter during their shifts.  Usually, my experiences with customer service people have been positive, but today was an exception on more than one front.

One of the fringe benefits of my job is that the cost of my monthly bus pass is taken out, pre-tax, from my paycheck.  The next month’s bus pass usually arrives in the mail sometime between the 24th and 28th of the month.  No such bus pass arrived this month.  This morning, I called the Fringe Benefits Management Company, who oversees the commuter pass program, and the woman on the phone told me that–for whatever reason–the post office returned the card to them.  (Never mind that other mail, especially magazines and bills, have no trouble making it to us.)  The address was still valid, we’ve lived here a year and a half.  It would be 30 seconds out of their day to put the bus pass in a new envelope, and, just to be safe, mail it to my work address, right?  No, they couldn’t do that, because COTA, when the bus pass came back, credited my paycheck.  It apparently involved too much hard labor for someone at FBMC to dial my number to tell me that my pass had been returned, and to ask me did I want it mailed to an alternative address?)  A few keystrokes on their computer could have rectified that.  But no, I have to buy the bus pass myself this month.  And if the benefits administrator mailed me a bus pass anyway, COTA is out $22–their problem, not mine.  If COTA asked the benefits administrator, “Did you mail it back to us?”, all the benefits administrator would have to say is, “Why, yes.  You mean you didn’t get it?”  The FBMC people worked about as hard as the Unknown Soldier to fix this situation.
And it doesn’t end there.  Steph gave me a Visa gift card, and I decided to do something responsible with it, rather than go on a minor spending spree on Abebooks or Amazon.com.  I thought I’d pay my cell bill with it. I logged onto their Website and entered the Visa card number, expiration date, the works.  Three times I submitted, three times I got the message that there was a problem submitting this payment.  There was a sufficient balance on the card, I typed its number in correctly, I did nothing wrong.
Revol is my cell phone carrier, a small carrier out of Independence, Ohio (a Cleveland suburb), and what makes this glitch so galling is that they expect their customers to pay online or with plastic on the phone.  They go so far as to add a $3 surcharge for people who show up at their stores and pay the bills in cash, in person.  If they are going to penalize people who pay in cash, and in person, which is actually more convenient for them, their customers should expect nothing less than an online payment system that works the first time every time.
Certainly their phones don’t work first time, every time.  In Clintonville, the neighborhood I call home, I may or may not get a signal in my own house, depending on what room I am in, or even what corner of what room.  They wring their hands about other services not leasing them tower space, yet they don’t turn over one spade of dirt to build new towers.  I am counting down the days until a Revol phone drops or loses a 911 call in a life-and-death situation.  The lawsuit that will result from that would rival what B.P. is going to pay to clean up the spill. 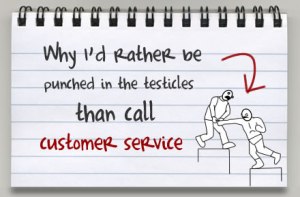