Susie’s an eighth-grader at Dominion Middle School, and she and I were there last night to see the second performance of Sideways Stories at Wayside School.  When we moved from Clintonville to Weinland Park, Susie decided that she wanted to go from homeschooling back to a brick-and-mortar school, and Columbus Public said that Dominion, where she had been before, was the nearest school.  Unfortunately, the cast for Sideways Stories was set when she returned, so she was unable to audition for it.  We both laughed quite heartily at the play, and Susie rooted for her friends and classmates throughout the performance.  She is on the edge of her chair waiting to audition for the spring play, which will be Annie.

The night was quite young for me once Susie and I returned from Dominion.  I went to a Mustache Party at the Pirate House, the Baja Clintonville dwelling house of several young adults I know at church.  The rule was all attendees had to wear a mustache.  This was no problem for me, of course.  I’ve had facial hair almost constantly since I was mature enough to grow it.  Part of the reason I’ve almost consistently had a mustache is to hide what remains of a plastic surgery scar on my upper lip.

Guests who did not have their own mustaches could buy them for $1 (our hosts bought them in bulk from the Oriental Trading Company), or someone would draw them on with a black Sharpie.  The fake ones stuck on quite well with spirit gum, although I saw very few people wear them on the upper lip.  I saw more than one unibrow (like Bert from Sesame Street), and two or three women stuck the fake mustaches to their cleavage, so I guess you could say this party can really put hair on your chest. 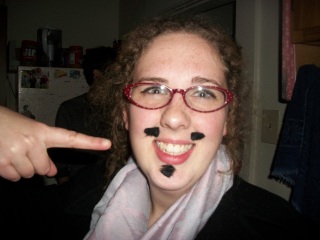 A negative mustache, complete with “stinger” (like
the late Frank Zappa) under the lower lip.

I’m in the background, recording the swordfight
(see below) for posterity.  (Photo by Haley
Nuckles.)  I made this my Profile picture on
Facebook, although I’m not well known for
being a photographer.

Ben, Amber, Lindsey, and company attracted quite a varied crowd.  I spent an hour talking about various James Bond movies (and the actors who portrayed 007) with a guy who, like me, was born in Parkersburg.  He brought me the tragic news that Trans-Allegheny Books, one of the best used bookstores I have ever seen, may soon be closing its doors forever.  In the kitchen, I heard several spirited anecdotes about using a can of hair spray and a lighter as a makeshift blowtorch.

I even witnessed (and recorded for posterity) a very brief sword fight in the kitchen.  Two women squared off with the tiny plastic swords that bartenders use to skewer Maraschino cherries.  (Here is the video.  It’s hardly Fight Club.)  When I was a kid, I developed a taste for Maraschino cherries, because I wanted to look like I had a “grown-up” drink.  I’d put a skewered cherry in my glass of Hi-C or Hawaiian Punch when I drank with the adults.  (Maybe my folks should have bought little paper umbrellas for me.)

The assortment of libations available was quite impressive.  It wasn’t at all like the many after-hour BYOB parties I went to in Athens and Cincinnati, where the only variety was in the brands of beer.  I had stopped at a little hole-in-the-wall store on Summit before I arrived at the party, bought some Diet Pepsi for myself, and a two-liter of Coke for general consumption.  The Coke bottle joined many different bottles of bourbon, rum, vodka, and whiskey on the kitchen table.  There was even a bottle of absinthe on the table, which surprised me, because I thought that absinthe was illegal in the U.S.  (That has changed; absinthe is legal as long as it has less than 10 parts per million of thujone, long believed to be its addictive and hallucinogenic ingredient.)

In my too-long drinking history, I have never tried absinthe.  This was because of its not being readily available, not because of its illegality.  (I have a rules-are-for-euchre attitude when it comes to most drug laws.)  One of my favorite historical novels is Irving Stone’s Lust for Life, a book about Vincent van Gogh, and the last thing you want to do after reading this book is drink absinthe. 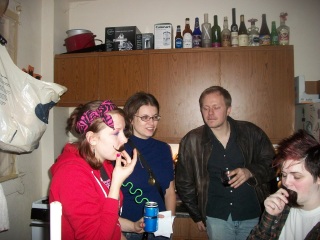 Sometimes the kitchen was the social center, and
it was equally because of the proximity to the
liquor buffet and because it was a great
conversation center minus the loud music.

I could tell that none of the party-goers had made a run to West Virginia or Kentucky, because no one had brought any Everclear.

During my days at O.U., occasionally someone from Cincinnati would go across the Ohio to Kentucky and buy some 190-proof Everclear.  (It is illegal to sell grain alcohol in Ohio, but not illegal to possess or consume it.)  The lightweights could always buy 151-proof if they made the trip over to West Virginia.  Anyone who drinks Everclear straight should immediately be locked up for attempted suicide, so usually a host would mix it with generous amounts of punch, orange wedges, and Sprite.  The finished product had many names–hairy buffalo, purple Jesus, and boom-boom juice are three names I can think of right off.

I was home and in bed a little after 3 a.m., and didn’t fully get out of bed to stay until after 11 a.m.  I prided myself on being able to get into bed without waking Steph.  (In recent weeks, we’ve separately had epiphanies about our marriage and whether it has a positive future.  Divorce is not off the table by any means, but at this point it is not the fait accompli that it was earlier in the fall.)

On Thursday, I went to the Martha Morehouse Medical Pavilion for my second paid trip into the MRI machine.  I was paid double this time, because they injected a dye into me intravenously.  I was afraid I’d have to go on the treadmill, but I was supine the whole time, except I went into the MRI feet first this time, again with WOSU-FM for background music.

The most amusing and noteworthy event of that whole experience was in the waiting room.  Two Mennonite women were there.  One was nearly 70 years old, and she kept her nose in a magazine the entire time.  Her companion was a plump woman in her mid 20s, whose eyes seemed to be glued to the TV on the wall.  I took little note of this at first, until I saw that Live with Regis and Kelly was playing.  They were broadcasting from Las Vegas, and they featured Thunder from Down Under, male strippers from Australia who were performing for a crowd of estrogen-overdosed women in the audience.  The younger Mennonite woman could not take her eyes from this.