Am I the only person out here who was ignorant of planking before today?  The Doo Dah Parade began 45 minutes late this afternoon, which meant many bored and restless parade-goers lining both sides of N. High St. in the Short North.  (Correction–Susie and I stationed ourselves at the tail end of the parade, and we were out on High St. awaiting it at the time it was stepping off from another point in the Short North.  07/05/2011)  There was a sign on the façade of the Short North Tavern proclaiming a 1 p.m. stepping-off time, but they were nowhere near ready to go.  Children kicked and chased beach balls back and forth across High St., and then Susie saw some of the alleged adults trying out planking.  This means lying down in the street face down, arms at your sides, long enough for one of your cohorts to snap a picture.  Said picture will most likely be on the Internet within hours.  Susie heard about it when one of her Facebook friends posted about it, and then ran pictures of her and her sister doing it.

So she tried it today, lying parallel to the center line on North High Street.

In an earlier entry this week, I wrote about the 50th anniversary of the death of Ernest Hemingway (which was July 2).  While looking for something else, I found my tattered Lancer Paperback of Ernest Hemingway: The Life and Death of a Man, by Alfred Aronowitz and Pete Hamill.  It appeared in 1961, very shortly after Hemingway’s suicide, and I bought it because of the description on the back cover, which describes Papa’s life as one anyone would envy:

The Doo Dah Parade featured the usual suspects, especially the Marching Fidels–a retinue of Fidel Castro lookalikes, complete with beard, olive-drab army jackets, and cigars.  The Fishnet Mafia, sponsors of the monthly Rocky Horror Picture Show at Studio 35, were out in force, doing the Time Warp again (and again!) all the way down High St.  Some of the marching acts were beyond description or theme, such as this one:

The work day beckons at 8 a.m., but luckily I only have a half day.  I just “happened” to schedule an appointment for the afternoon after the return from a long weekend, and when 5 p.m. comes, I’ll have to overcome the hard-wired urge to head toward Cleveland Ave. and the Columbus State bookstore.  I won’t be working there until next Saturday morning, so Susie and I will be at poolside tomorrow evening.  (Christ, I sound like a character from The Stories of John Cheever!)  The weather looks like it will cooperate; the high is supposed to be 89 degrees and cloudless.  I may even go in the water myself!  (During the ’70s, I used to shudder when I watched the “Take the Nestea plunge!” commercials on TV.  They would still have to pay me a five-digit sum to act in one of those!)

It’s after 3 a.m., and I’m still awake.  Maybe because of the surplus of sleep, maybe because I’ve drunk half of a three-liter bottle of Stars & Stripes diet cola, or a combination of the two.  But here I am, in front of a keyboard, instead of nestled all snug in my bed.

Not much newsworthy has occurred since I posted before.  This has been a false cause for hope in the past, but this evening I actually made an attempt at writing.  I made a sincere effort to minimize the clutter on my work table in the living room (not 100% successfully yet; watch this space for pictures once that happens!), and I cleared enough of the surface that I can put the laptop and my beloved (and quite underused, lately) Royal Royalite manual typewriter side by side.

The typewriter indicted me by how many stuck keys it had.  After a little more digging, I found the plastic squeeze bottle of Liquid Wrench and applied it where needed.  After typing a page or two of random lines here and there, and staining the typing paper with excess Liquid Wrench, I put in a blank page, rolled it to about one third of the way down the page, and hit the shift lock.

CHAPTER ONE
I remember sitting in the chair and looking at that for quite some time.  For the page to sit there in the carriage for days, with only that heading, would be mocking.  I felt like I had committed myself to something, but when I typed those words, I didn’t have the slightest idea what fiction project I had in mind.  Did I type that just so I could hear the sound of the keys striking paper once again?
Turning away from the typewriter, I reached over to one of my milk-crate bookcases.  I pulled out my navy blue 1983 New Yorker diary, in which I’ve jotted ideas for various projects, written plot outlines, named characters and written little dossiers about their background and character traits (siblings, jobs, favorite flavor of ice cream, alma mater), and even sunrise and sunset times for the specific day on which a story takes place (courtesy of the U.S. Naval Observatory’s site).  I looked over some notes I wrote when I first bought the volume (I bought it online last year–it has not languished in my possession since 1983), and then scooted back over to the almost empty page in the roller and ended up producing six paragraphs.  The writing process was not easy, and it wasn’t because I had to gear down my typing speed to accommodate this aging machine.
And yet I almost did not share this bit of news with my “14 readers out there in the darkness,” because I’ve often jinxed myself by my own hubris.  Look!  I produced just over one page–the dry spell is over, I’ll have the 21st-century equivalent of Ulysses stacked up on this desk in three short months.
I reread my last entry, where I described my asinine neighbor and his barrage of firecrackers and bottle rockets.  (The police never did come.)  Rereading the entry reminded me of one that I posted when LiveJournal hosted this blog.  In this entry, which you can find here, I described how I miraculously escaped injury when someone dropped a cherry bomb or an M-80 into a wine bottle.  I was standing about an inch away, wearing sandals, and to this day don’t know how I escaped injury.
I’m not sure if my email will appear in Notebook Stories or not.  As I wrote before, two of the planners that I brought home from the Really, Really Free Market last week were from Greek organizations.  I am getting a genuine kick out of reading the information printed in these books before the calendar pages begin, about the histories of the organizations, the codes of conduct, the mythical zero-tolerance policies on substance abuse and hazing (Phi Delta Theta calls it “Don’t Tarnish the Badge”), and how to flourish as a member.
One of the people in my small group in Philosophy 101 was a Sigma Chi pledge, and the reason I remember that was because he constantly carried his copy of The Norman Shield with him, and he hung onto it like it was some kind of Bible.  I was a devout Gamma Delta Iota (goddamn independent), and could barely afford textbooks and drinking, let alone the dues that many of the fraternities charged on a quarterly basis.
The most amusing thing I found in the Phi Delta Theta planner was that their national headquarters is in Oxford, Ohio.  This does not amuse me because I went to Ohio University, and Miami is the closest thing we have to a rival.  (And it never reached the insane levels that the Ohio State-University of Michigan rivalry have achieved.)  I chuckled because of an event last year at Miami University, when the behavior of Pi Phi sorority members and their dates at a party (read about it here) led to a one-year suspension.
The only significant way Susie and I are going to mark the Independence Day holiday (and it is right now the Glorious Fourth) is with a trip to the Short North to see the Doo Dah Parade, which steps off at 1 p.m.  A parade that marks the birth of the United States and doesn’t take itself seriously… priceless.

And how did I spend most of it?  I slept.  I wish I could say it was cleansing and restorative sleep, but I slept mostly to escape.  Worries about finances (or the lack thereof) and debts (of which there are many) have kept me from focusing on anything else.  I haven’t written in my diary, haven’t typed a word of the short story I meant to finish in May, and can’t stay on task with much.  So I took to my bed.

On Sunday, I did stir enough to take Susie to the Doo Dah Parade, an annual Short North tradition that combines the nationalism inherent in Independence Day with political and social satire.  Everyone threw dignity and caution to the winds and marched in the parade in various costumes.  Susie was bored waiting for the parade to start (it was late getting going), but perked up a bit when she saw one of her friends, and they took part in an (attempted) mass jump-rope. 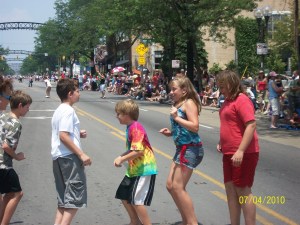 Susie is on the end, dressed in red top and shorts.
After the parade, we picked up a late lunch at Subway in Graceland Shopping Center and brought it home.  I ate my meatball sub and drank my Sprite, and then slept until almost midnight.  There is no pattern or duration to how much I slept this weekend–I didn’t log it, because I didn’t think I would be doing so much of it.  The snoring must be under control, because when I collapsed so early Friday night, Steph thought I had been out all night.  This morning–very early–I made a trip to White Castle for Steph and me.
To counterbalance this rather dismal entry, here are some more pics from the parade: 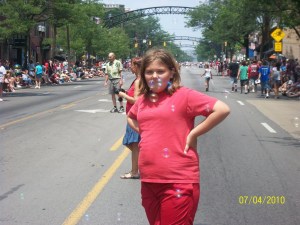 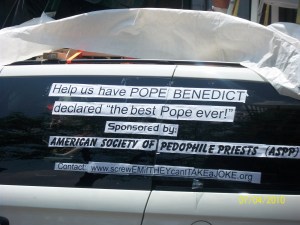 I wanted to get the whole car and float,  but this
was what I thought was most worth recording for
posterity.  My ultimate dream: President Obama
appoints Andrew Vachss U.S. Ambassador to
the Vatican. 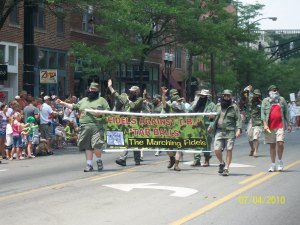 The Marching Fidels, a staple of the Doo Dah Parade
since its beginning. 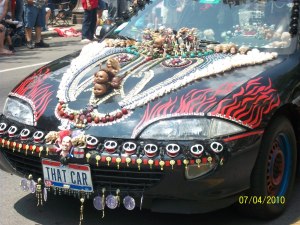 This picture should appear in the dictionary by
the definition of ubiquitous. 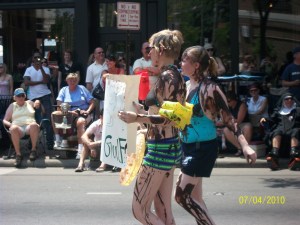 Fresh from a dip in the Gulf of Mexico. 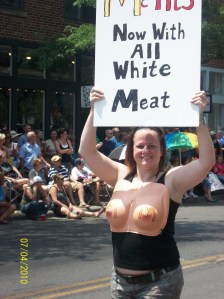 Much more appealing McDonald’s ad than
the ones featuring the Hamburglar and
Mayor McCheese that I remember from
childhood. 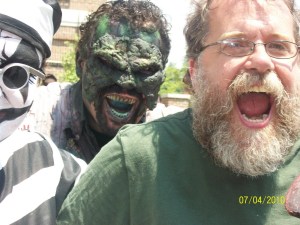