My horde of readers must be wondering what accounts for the latest silence in this blog.  The reason this time around is 100% unique, and without precedent in the years that I’ve taken to the Internet to vent my spleen.

Ever since the time of the first polar vortex to blast through Columbus, and until last Monday, my half-double was without a furnace.  In the 2½ years that I have lived here, the property management company has been very dependable and prompt with whatever problems that came up with this place.  So, when my furnace conked out soon after the new year, I took for granted that it would be up and running within days, and certainly ahead of the days when the mercury would remain below 0 for days.  (At first, my thought was that, like Archie Bunker, I had a “religious furnace; it never works on Sunday.”)

I texted the property manager, and the company’s HVAC guy came to look at the furnace.  The igniter had worked erratically for much of the fall, so he came fully prepared to fix that.  (This was a gravity furnace, about 20 years old, and had no pilot light.)  I was not a happy man when he told me that the furnace no longer worked, and needed to be replaced.

Worse than that, the manager told me that he could not tell me when this would come to pass.  The Band-Aid solution he offered was to lend me space heaters, and these presented problems all their own.  If I had the lights, TV, and space heater on simultaneously, the circuit breaker would trip.  (The switches on the box downstairs were unmarked.  When you live alone, this is a colossal pain.  If a circuit breaker tripped when Susie was living here, I could always flip the switch, and yell up the stairs, “Did the lights come back on?”  Now, it meant running up and down the basement stairs to see if I had made the right choice.) 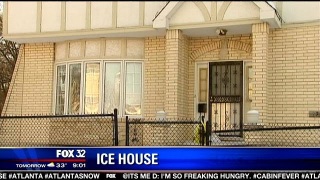 Even with the space heaters, I could not wear short sleeves in the house, and walked around in a sweatshirt and often a down-filled work shirt.  This began to take an emotional toll as well.  My mood plummeted, as did my energy to do anything other than get myself to and from work every day.

Common depression symptoms are insomnia or hypersomnia–either not sleeping enough, or sleeping too much.  Since being under the covers was the only place I felt warm enough, there were many nights when I was in bed by 7:30 or 8.  Far from being restorative sleep, I would awaken in the morning feeling exhausted from the hard sleep.  (My dad described the condition as being “sleep drunk,” and it is quite fitting.)

Soon, the property management company was not returning my phone calls.  I was debating whether to escrow my rent, or whether I should report the situation to Code Enforcement, but I was afraid of retaliation by the landlord and/or the management company.  Then, during the second week of February, I learned some news.  The property had been foreclosed, and was scheduled for sheriff’s auction on the 28th.

I did not learn this from either my landlord or the property manager.  I learned it from a neighbor who works at a law firm downtown.  He had seen it in The Daily Reporter.  As soon as I could, I went to the Franklin County Sheriff’s Website, and sure enough, there it was.  A day or two later, I looked up this property on the Franklin County Auditor’s Website, and I almost choked on my Diet Pepsi.  There was a new owner listed, with an address on the outskirts of Pittsburgh.  A day or two later, I received a phone call from a person introducing himself as the new property manager.  The place has a new owner, and new property manager, and the entry for the sheriff’s auction was withdrawn.

The first thing this new property manager did was hire a company to waterproof the basement and install a new sump pump.  This was good news, because it was getting to the point where I would start sneezing the minute I came downstairs to do laundry (or check the circuit breakers).  He then told me he would have a guy come and look at the furnace.

The new HVAC guy met me at my door after work a day or two later.  The minute he took the faceplate off the furnace, his jaw dropped open.  The furnace’s exchanger was not working properly, and he said it may have been blowing carbon monoxide up into the house.  I thought that this may explain my overall lethargy, depression, and fatigue.  The levels were nowhere near fatal, because the rooms are so big and because, this being a house built in the 1920s, the rooms are not well insulated.

He shook his head as he looked at the furnace’s electrical wiring.  Much of the insulation had been burned through, and some of the wires were wrapped in black electrical tape.  Apparently, I have dodged a bullet here.  He told me that he was very surprised that there had not been a fire or an explosion.

My mood improved over the weekend, and on Monday morning, as I was dressing for work, the HVAC guy called.  He was coming that day to install the furnace, and wanted to make sure I was leaving him a key.  That was great news to begin the day, so I was like a little kid on the last day of school throughout the work day.

And I was not disappointed!  On Monday, I stepped across the threshold of my abode, and a Glenn Frey song came to mind: “The Heat is On.”  There was even a new thermostat, a white digital model about the size of a deck of cards, mounted on the dining room wall.  It was set at 65 degrees, but I moved it up a little to 72, and felt myself wanting to stay home for the first time in weeks.

On Friday, he is coming back, and this time to install central air.  This will be a first for this property.  Oddly enough, the place came with central heat, but no central air.  Even though I vowed that I would not complain about the heat this summer, even if it remains in the triple digits for weeks on end, this indeed was welcome news.  I bought a window unit last year, but it was only able to cool off one room at a time.

To supplement the torpor brought about by not having heat, I fell on ice last week and mildly injured my right wrist.  Of course, I am right-handed.  I put the hand out to break my fall, and was in immediate pain (although I knew I had not broken the hand or the wrist).  I had to stop diary-writing, which always makes me feel like I’m going through withdrawal.  I had been looking forward to christening the journal that I bought at the Barnes and Noble in Merritt Island when I went down there at Christmas.  My diary entries tend to be at least two pages long, and even something as simple as filling out a fax cover sheet was enough writing to cause my wrist to hurt.  So, I waited until I could write without pain (I was able to type, because the pain was not as bad) before I wrote the first words in the new journal.

So now, as of this Ash Wednesday, I have things I used to be able to take for granted in this house.  I have heat and a dry basement.  Just in time for the arrival of the vernal equinox.