Tonight is my night off from the Columbus State bookstore, since it’s only open until 6 on Fridays.  (My night shifts start at 5:30, so there is no sense in working for only half an hour.)  I enjoy the job at Columbus State, and my co-workers are good people, but I still felt great when all I had to do after work is come home via the local branch of the library (to pick up reserves).

Most nights this week, I’ve simply been too wiped out to sit down and type an entry once I’m home, and once Susie is in bed and Steph has retired to her bedroom for the night.  That is why the entry I’m writing at the moment will not hang together, subject-wise, and I doubt it’ll flow in any conventional sense.

Slowly, I am easing myself back into walking.  The bookstore job has entailed a lot of walking back and forth on the second floor, either shelving books, straightening out awkwardly placed volumes, or helping customers.  Although the vernal equinox was Sunday, temperatures in the 20s and 30s have made return appearances in Columbus this week, so I haven’t considered walking home after the bookstore job ends at 8 p.m.  (It ends at 9 p.m. as of Monday.)  I logged plenty of mileage on the floor, but I have only had two “real” walks since I last posted.

The first was on Saturday night.  The monthly “Return of Nite Owl Theater” was a week early, because Fritz the Nite Owl is at HorrorHound Weekend in Indianapolis this weekend.  I walked the three miles each way to the Grandview Theater and thoroughly enjoyed the 1962 black-and-white film Carnival of Souls, starring Candace Hilligoss.

I found the movie even more enjoyable when I realized that its director, Herk Harvey, filmed some of it in a place I have actually seen.  The abandoned amusement park where the heroine is trapped by disembodied souls cavorting about is the Saltair Pavilion, located just west of Salt Lake City.  I remember seeing it in 1987, as I was en route by Greyhound from Athens to San Francisco for spring break. It stood out in the midst of the Great Salt Lake on over a thousand pilings, and I remember seeing it from I-80 and wondering just what it was.  (A year later, I was walking down High St. here in Columbus when two young Mormon missionaries tried to proselytize me.  Both were Utah natives, so I got them off on a big tangent by describing the building and asking what it was.  We ended up talking about that, a welcome break from Mormon theology.) 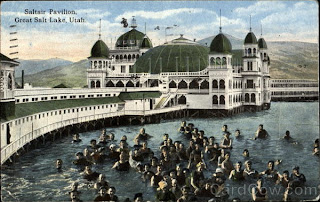 I walked very briskly home, because the temperature dropped 10 or 15 degrees during the movie, and I was a little underdressed for the weather.

The other walk was because of a fax machine error.  One of my co-workers tried over six times to fax paperwork to OPERS (the Ohio Public Employees Retirement System, what we pay into in lieu of Social Security).  It went through our machine fine, but never seemed to arrive on the other end.  She was getting more and more frustrated, because the meter was running on the deadline for submitting this paperwork.  Finally, I told her I’d run it over to OPERS’ office on E. Town St.  It was exactly a mile each way from our office, and I needed to get some pavement under me, no matter how much I had been resisting it.  She was quite grateful.  She sealed it all in an envelope and gave it to me, and I left the office at 12:30.  (“Cue the theme from Rocky,” I told her on my way out.)

It was a good walk.  Despite being a little out of practice for me (I wish I had the mindset that I had when I posted all my entries and Tweets about always jonesing for a good long walk), I kept a pretty good pace and obeyed all the WALK-DON’T WALK signs, which is something totally out of character for me.  It was misting just a little, so I very conscientiously kept my co-worker’s envelope underneath my sweat jacket.  (I thought of my cousin Bob, describing to a desk sergeant how he knew that he had paid a speeding ticket: “It was drizzling rain, and I got into my car with that envelope, and I carried it upside down, so the rain wouldn’t blot the address, and I put it in that fine box by the Delaware County Bank.”)  I gave her envelope to the receptionist in PERS’ lobby, and when I asked for a receipt, she Xeroxed each page, date-stamped the front one, and handed them back to me.  I put them back in the envelope and returned to the office.

Some of our customers at the bookstore are people who, for whatever reason, dropped out of high school, and are at Columbus State to get their GEDs.  The GED books are in constant demand, and I am sure many of them are very diligent students.  (I considered dropping out of high school and going for the GED, but my dad insisted I get a job if I did that, and Ohio was 49th in employment at that time, and regular work was anathema to me at that period of my life.)  After he retired from Marietta College, Dad taught GED classes a night or two a week, and he told me that many of the students there were more conscientious than his college students.

What appalls me is how many people have no clue how to locate their books, or how to determine what books go with what courses.  The layout of the second floor shelves is pretty straightforward.  Subjects appear alphabetically, and the course numbers are numerical within those.  The free-standing bookshelves go from A through N.  N through the end of the alphabet (Veterinary Technology).  In the “teach a man to fish” spirit, I explain that when someone asks how to find a book.  On several occasions, I have had to pretty much lead the person to the book they want, and then point to the shelf tag to show them what books or materials go with the courses.

I had the same issues when I worked at DuBois Book Store in Cincinnati, situations which I satirized (quite mercilessly) in my as-yet-unpublished novella The Textbook Diaries.  My constant thought when these situations arose was, “If you need to be led by the hand to find your books, and cannot puzzle out an alphabetical shelving system and straightforward shelf tags, then maybe college isn’t for you.”  That thought even popped up once in awhile when I was in Harvard’s orbit.  Most of the people I met during my 18 months in Cambridge were bright, intelligent, and creative, but there were some whom you knew were only there because their parents could afford the tuition and promised generous contributions.