Day three at the Discovery Exchange makes me feel better and better about redoing this job.  I won’t lie–working a second job, no matter how temporary, takes a lot out of me.  I’ve also been curbing my excessive caffeine consumption the last week or so, which means the end of the workday makes me feel a lot more exhausted than normal.  Yet, as I headed to bed tonight, I remembered my duty to my readership–analogous to Fritz the Nite Owl’s “14 viewers out there in the darkness”–so before I fall asleep, I’m at the keyboard typing up this blog entry.

Since my job at Columbus State’s bookstore began Monday night, my evening task has mostly been shelving new books, usually straight out of the delivery cartons, and last night this expanded.  An overloaded book cart, groaning under the weight of buybacks, materialized on the second floor last night, so I spent most of the evening putting them back where they belonged.  (Winter quarter at Columbus State is winding down, and spring quarter will soon be upon us, so there are deliveries galore.  When I worked at DuBois Book Store in Cincinnati, the arrival of a UPS or Roadway truck often resembled scenes in M*A*S*H when casualty-laden choppers and ambulances began arriving, a real all-hands-on-deck atmosphere.)

Tonight was a little different.  I’ve been beating myself up the past couple of weeks because I haven’t had the mental or physical energy to do any long walks lately.  Even the two blocks to Kroger has seemed to be like climbing Everest in flip-flops.  I felt a little better Monday and Tuesday nights, because the amount of territory I covered when shelving books meant I did a fair amount of walking on the second floor of the Discovery Exchange.

Partly because of brain wiring and chemistry, there is no logic to the way I shelved the books.  I pretty much shelved them in the order they sat on the cart, regardless of whether the textbooks were for subjects that were close to one another on our bookshelves.  (I also see myself doing this when I’m at the grocery store and working from a shopping list.  I will pick up items in the order they appear on the list.  Item #1 and Item #2 may be clear across the store from each other, but that is how I will get them.  Steph and I were married over a decade before she finally realized that the most expeditious thing to do was to organize the list so that all the meat products were clustered together, all the cereal, all the dairy, etc.)

Tonight I arrived when there was not much shelving.  The night supervisor gave me an assignment that didn’t require as much pedestrian activity, but it was a necessity I had noticed.  He gave me a pair of scissors and a thick stack of shelf tags.  On the shelf hangs a transparent plastic pocket for a tag.  The tag lists the title of the course, and below it is a list of all the required textbooks and materials.

I had my appointment with the otolaryngologist and audiologist at OSU this afternoon.  I met with two doctors, had a thorough hearing exam, and the diagnosis is tinnitus, a constant ringing or buzzing in the ears, ICD-9-CM code 399.30.  I have felt this since before Christmas, but thought that it was a byproduct of my annual bouts with coughs, sneezing, and runny nose, so I rode it out.  This time, it wasn’t going away.

The hearing check reminded me of the tests I had in first grade.  The equipment is more sophisticated, and the setting a lot more pleasant than the school nurse’s office, but it was essentially the same.  I held a clicker in my hand, and I was supposed to push it whenever I heard the tone in one side or the other of my headphones.  The tones varied in pitch and in volume, but I pushed the button whenever I heard one, or thought I did.

How did my tinnitus come about?  I have never had a job where I’ve been around constant high-decibel noise, such as operating a jackhammer, or playing in a heavy metal band, or working on the ground crew at an airport.  I shudder when I say this, but it’s a byproduct of aging (I will be 48 next month).  There has been nerve damage in my ears, and the affected nerves pick up sounds in the higher registers.  Since I am no longer hearing more high-pitched sounds, my brain is generating the non-stop, high-pitched whine to compensate for it.  (I realize I may have had this problem longer than I thought: When listening to any type of recording, whether it is music or voice, I always turn the treble as high as it will go, while keeping the bass level in the middle, at the very highest.  If I owned a more high-end stereo system–I almost typed “hi-fi,” betraying how old I really am!–I probably would have gone through tweeters by the dozen every year.) 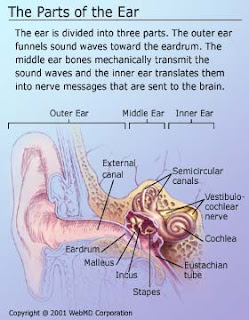 What is to be done?  Apparently nothing, unless the whine intensifies to the point that it either prevents me from sleeping or awakens me during the night.  The doctor and the resident both suggested that I take melatonin, which would increase restfulness and lessen the effects of the tinnitus to the extent that I can sleep better.

In other news, tonight was my first night back at the Discovery Exchange, Columbus State’s bookstore.  I was home briefly between the doctor appointment and the job at the bookstore, and it was good to be back to work.  This is finals week at Columbus State.  On the second floor, which is where I work, cartons of incoming books tightly occupied every square inch of available floor space.  There were only two of us working, and not many customers, so I took a cart full of books and began shelving them.  It’s my first day back, so I need to relearn where many books go.  By the weekend, I’ll be able to glance at a book cover and better know where it belongs, from sheer repetition if nothing else.  Tonight, I focused mainly on titles I knew instantly, especially the basic English reference books such as The Blair Handbook.  It’s best to take the low-hanging fruit in the beginning.  The best way to find something is to stop looking for it.