Yet another National Novel-Writing Month (NaNoWriMo) has come to an end, and both Susie and I (in Florida and Columbus, respectively) are trying to recover.

I am skeptical (at best) about the effectiveness of Twelve-Step programs, but the “one day at a time” concept does have its uses, and NaNoWriMo bears out its usefulness.  Every evening (mostly evenings, sometimes afternoons), I sat down and faced the laptop like it was some type of adversary.  When I logged onto Microsoft Office and pulled up my manuscript, I did it with an emotion akin to dread.

Trying to write a certain number of words per day (1667 per day is necessary to produce 50 thousand words in 30 days) is a lot like visiting a nudist colony: The first few minutes are the hardest.  I know that when I began typing, that magic number of 1667 seemed so far away.

But, as the session progressed, I usually was able to get into the activity, and when I saw I had made my quota for the night, I almost had a feeling of disappointment–“You mean I have to stop now?”  Of course, I didn’t, but I wanted material to fill the next night’s session, and not have to scramble.

The manuscript now sits on my hard drive and on my Microsoft SkyDrive.  I am following the advice of Stephen King, and I am letting the project “marinate” until after the first of the year.  NaNoWriMo is not ashamed to say that the goal is quantity, not quality, so I am sure I overran the manuscript with verbiage and asides that will have to go.  Some word-padding techniques can stay.  (For example, I did not use contractions, except in dialogue.)  Truthfully, I have no qualms about not touching it until January.  I am sure I am going to look back over it and wonder what the hell was I doing writing such-and-such?  (Susie has read excerpts of it, and so far I have received her seal of approval.) 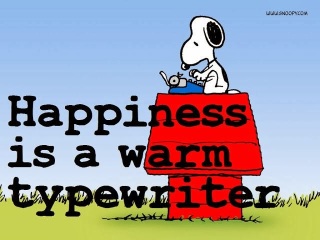 Another thing her project and my project have in common is that they are both incomplete.  As you may recall, I decided to make NaNoWriMo the subject of this year’s manuscript.  Thus, I began with a brief prologue, and each chapter afterwards represented one day in the contest: “Day the First,” “Day the Second,” et cetera.  I stopped at Chapter V, “Day the Fifth,” so once this book comes out of lockdown, I have 25 more chapters to write.  Susie says she is two chapters away from those beautiful words THE END.  (I will end it, as a tribute to my former typesetting days, with – 30 -, which I have often thought should be my epitaph–my name, and underneath it, – 30 -, carved on my tombstone.)

I took a page from Jim Bishop when I used these chapter titles.  In his books The Day Lincoln Was Shot and The Day Christ Died, he broke down the book into hours–each chapter represented one hour of the day he covered.  In his one and only novel, Honeymoon Diary (I met him in 1979, and he said, “Oh, Jesus!” when I told him I had read it), the titles were “The First Day,” “The Second Day,” all the way up to “The Thirtieth Day.”

Sleep has been the biggest casualty of NaNoWriMo, although my sleep patterns have been erratic for years.  I can’t lay the blame solely at the feet of this contest.  I am constantly dozing off on buses, or anywhere that I lack new stimuli.  And, as before, I can doze off straight into REM sleep, which means falling asleep and straight into dreaming.  Unless I have specific plans, on weekends I do not set an alarm.  (Even on Sunday; if I am awake in time to catch the bus and go to church, I will; otherwise, I take it as a sign and I’m content to “worship in bed.”)  So, every weekday morning, there is this Dagwood Bumstead scramble to get out of bed, into the shower, dressed, and out the door in time to catch the bus in time.  But, these past few weekends, I am wide awake before dawn, unable to get back to sleep.  Yes, I’ll toss and turn a while, but it’s a losing battle to try to get back to sleep.  And this is after not retiring until 2 or 3 a.m.

I took it easy the rest of yesterday, after submitting my manuscript to http://www.nanowrimo.org, where their template verified that I had enough words.  Yesterday was the Ohio State-Michigan game, and I was thankful it was in Ann Arbor, since the presence of drunken idiots would have been even greater had the game taken place at the ‘Shoe.  So, I thought it prudent to stay indoors, where I watched some DVDs of Homicide: Life on the Street and read.  (I kept my computer use to a minimum, since I had enough of my keyboard to last me awhile.)

Thanksgiving and Hanukkah coincided for the first time since 1868, and this will not happen again until 2070 (Susie will probably be experiencing this).  The coincidence that Black Friday occurred on a sacred holiday did not deter the shoppers.  We here in Columbus did not experience the brawling, gunfire, and stabbings that some communities had.  I, for one, kinda sorta boycotted the whole thing.  I went to two record stores, Spoonful Records and Records Per Minute (RPM), and bought some albums there–I kept my money local, and supported friends of mine.  The haul was not overwhelming, since I didn’t buy any new material.  I stuck to the dollar bins, where I could find much of the music of my teen years.  (As if my weirdo credentials weren’t already well established by high school, my favorite groups in high school were The Alan Parsons Project and Seals and Crofts!)

“Buy nothing day” was so much easier in the years when I was usually stone broke.