Very erratic sleep schedule this weekend, which means I’m now waking up (it’s after 8 p.m.) after a four- or five-hour nap.  I thought the best thing to do would be to share some of the D.C. pictures with my faithful readership.  My actual thoughts from Friday night to Sunday morning are available in the scanned handwritten pages that I’ve already posted.  That always reads better than recapitulating the experience later.

I was in bed a little after 4 a.m., after arriving back from the One Nation Working Together rally in Washington. I took the time to scan the pages from my union diary where I wrote my thoughts as they came to me, but didn’t post them (backdated) into the blog until this afternoon.  This morning, between awakening and leaving with Susie for church, I posted my pictures to my Facebook account.

Amelia Houser and I at the Communication Workers of
America’s union hall on East Broad St., just before
boarding one of two Washington-bound chartered buses.

The above picture reminds me of something Travis McGee, the hero of 21 novels by John D. MacDonald, said in A Tan and Sandy Silence that, if he carried a placard, it would read:

UP WITH LIFE.  STAMP OUT ALL SMALL AND LARGE INDIGNITIES.  LEAVE EVERYONE ALONE TO MAKE IT WITHOUT PRESSURE.  DOWN WITH HURTING. LOWER THE STANDARD OF LIVING.  DO WITHOUT PLASTICS.  SMASH THE SERVO-MECHANISMS.  STOP GRABBING.  SNIFF THE BREEZE AND LOVE THE KIDS.  LOVE ALL LOVE.  HATE ALL HATE.

We could not have asked for better weather, especially when I was giving Amelia, who has never been to Washington before, a good workout as we walked up and down the National Mall.  One Nation Working Together was not a march per se; the publicity was a little misleading in that respect.  It was more a rally, taking place at a fixed place.

And what better fixed place?  This is how the Lincoln
Memorial looked a little after 10 a.m.  I took this just
after Amelia and I crossed the Memorial Bridge from
the Pentagon’s parking lot in Virginia.
We didn’t go inside anywhere, but I did show Amelia the significant landmarks within visual range of the Mall, such as the Washington Monument, the Capitol Building, the White House, the National World War II Memorial, some of the visible spires of the Smithsonian, etc.
The Reflecting Pool in front of the Lincoln Memorial looked sparkling, which isn’t always the case.  I remember making a trip in high school and finding that it was drained, and that had been in May.  Sometimes in the summer that is common.  During the Poor People’s Campaign in the spring and summer of 1968, when Resurrection City stood on the Mall, the pool was emptied several times because residents were using it to clean clothes and wash dishes. 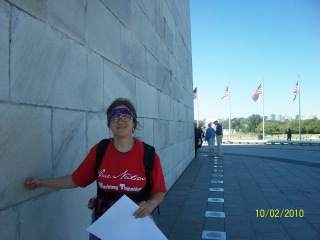 Amelia was happy to touch the Washington Monument, even
though we arrived too late to go inside.

This is the scene in the early afternoon. 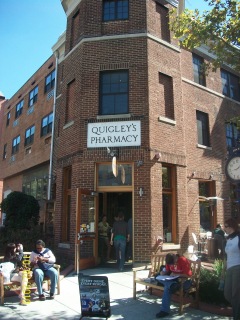 Happy for a brief respite from the crowd, Amelia and I
went to Tonic at Quigley’s Pharmacy on G St., NW, in
the heart of the George Washington University community.
My friend Robert Nedelkoff took us to lunch–a very good
lunch!  It’s always good to see Robert.

After the repast at Tonic.  Robert, as usual, looks like
he stepped out of the St. John’s Bay catalog, and I resemble
an outtake from America’s Most Wanted.

Bidding a reluctant farewell to the Lincoln Memorial.
I took this picture after Amelia and I walked back over
the Memorial Bridge (on the left) into Virginia, where
our charter bus awaited. 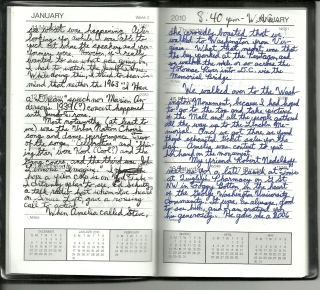 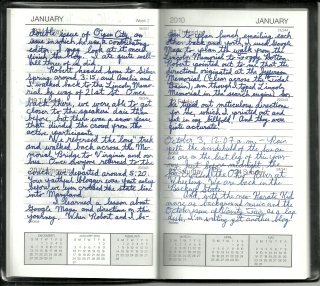