Another one of those weekends that is so crammed with activity that I almost feel like I’m going back to work to relax.  I spent much of the weekend in Goodale Park, taking in the sights and sounds of Pride Weekend.  It was almost an unofficial precursor to ComFest, which is next weekend at the same site.  (Until recently, these events coincided, but they now occur separate weekends.)

Scott and I went down Friday night, when the festivities were just starting.  We perused the food booths, the art booths, and the political ones (not just gay rights issues, but Stonewall Democrats, pro-choice groups, repealing Don’t Ask Don’t Tell, Libertarian Party, etc.), and the many, many vendors.  I entered a raffle for a trip for two to Florida (unless you hear otherwise, readers, I did not win).  I did win a book, Kings in Their Castles, from TLA on Demand (“We put the HARD in hardcore VOD”) when I spun a prize wheel. 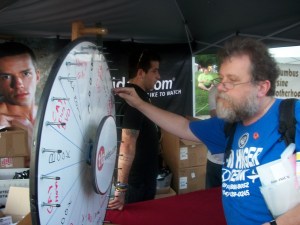 Spinning the wheel to win a copy of Kings in
Their Castles.
Progressive Insurance’s booth featured a unique way of attracting people.  They handed out small cards with the Progressive logo (Flo the Progressive Girl was not there in person, I’m sorry to say), and the women at the table wrote risqué slogans on them and laid them out on the table so you could pick out the one you liked, or you could make your own.  Two of my favorites are below:

Too much glare on the Progressive badge, but hers
reads YES, THEY’RE REAL. 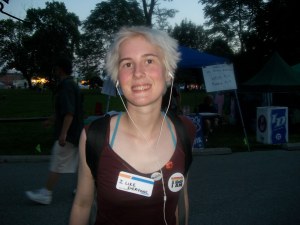 No double entendre, no blatantly political message:
I LIKE EVERYONE.  She’s just keeping it simple. 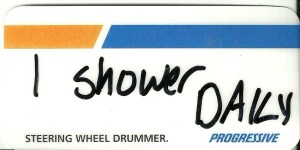 And, lastly, my own.  I opted for safe.
The Pride theme this year was Family, and I had been lukewarm about whether or not to participate, until I received some email from volunteers at Find-A-Grave.  They provided me with a picture of the tombstone of my aunt, Mary Anne Evans, who died in 1980, aged 49, and is buried at Mount Calvary Cemetery in Wheeling.  Aunt Mary Anne was a lesbian, although the word was never used in our family.  She and her life partner, Lois, lived together in the small house on Third Street in Marietta that had been ours until I was six years old.  I did a Google search on Lois and found out she died this past New Year’s Eve in an assisted living facility in Wheeling.  I looked at her obituary online from The Wheeling News-Register, and there was no mention of Aunt Mary Anne preceding her in death.  They are buried in the same cemetery, but not together.
Aunt Mary Anne and Lois were happier together than a lot of heterosexual couples I knew, especially my parents.  Lois was, I believe, the first adult I was allowed to call by first name, rather than Mr. or Mrs. Someone, and that was a big deal to me as a kindergartener.  I never thought twice about the fact that they shared a bed.
The same was true of Owen Hawley, a longtime colleague of my dad’s at Marietta College.  My dad told me when I was very young that he lived with another man, the same way someone else would live with a wife or a husband.  His partner, Ralph Schroeder, died in 1976, and Owen Hawley died in 2006.  They are, like my dad and stepmother, buried in Mound Cemetery, along with many Revolutionary War soldiers and the early political and religious leaders of Marietta.  I am not sure, but they may be the first gay couple to be buried there:

They’re hard to see, but there are ankhs engraved
at the top of their tombstones.
I slept too late to march with First UU in the Pride Parade, although I scrambled downtown by bus in time to take some pictures of the parade as it turned off High Street onto Buttles and into the park itself.  I spent the rest of the afternoon walking around, talking to people and taking pictures.  Around 5, I went back north on the bus so Susie and I could have dinner at Burger King and then head to Olympic Swim and Racquet to see Alice in Wonderland once the sun went down.  (It was the one with Mia Wasikowska and Johnny Depp, but Susie spent most of the time in the pool rather than watching it.)
The Weather Channel icon on my main menu was flashing “Heat Alert!” all weekend, and vendors were charging outrageous prices for bottled water.  Two women were so desperate to escape the heat that they stripped down to bras and panties and dove into Goodale Park’s pond, which is always green (and not from reflecting the grass’ color).  I saw several teenagers (boys and girls) do this at ComFest one year, and I shuddered at the thought of the algae, the trash, the broken glass, and the other objects that lie beneath its surface.  (The fact that the bottom isn’t clearly visible is a red flag that you shouldn’t be in there.)  Yet, they were undeterred:

She was prudent enough to dive in there with mouth closed.

After she gets dressed, her next stop should be the booth
where they were giving out free hepatitis shots.