Bay to Breakers is well known and respected in the world of competitive runners, and either a joy or a curse for people who live in San Francisco.  On a national level, though, not many people seem to know about it.  I took an uncharacteristic look at the Sports page of The Columbus Dispatch‘s Monday edition, and there was no mention of it, not even a one- or two-paragraph mention.

I waited in Corral G for the air horn signaling that it was time to take off.  Corral G the corral for walkers, and it’s the penultimate corral–the last one is Corral H, which is reserved for families.  Now that I’m a veteran of two Bay to Breakers race, and one Capital City Half Marathon, I am beginning to see that walkers are pretty much second-class citizens in the world of competitive running.  This is most evident in the media coverage.  I DVR’d WBNS’ coverage of the Half Marathon, and sure enough, they pretty much closed up shop after runners began crossing the finish line.  Reporters were stationed at various points along the 13.1 miles, but they were long gone before we were anywhere close.  (To their credit, volunteers along the route did stay to root for us, and to give us cups of water and Gatorade.)

At Bay to Breakers, from my perch embedded in Coral G, I could see that the serious racers–as well as the ones who were there for the Mardi Gras and party aspect–seemed to think of the walkers as the tagalong younger siblings who’d go away if you’d give them a quarter.

I know that the walkers can’t be released with the other runners, especially the seeded runners and Corral A, but it was a good 45 minutes before they moved Corral G up to the line, by which time runners were already crossing the finish line at the Great Highway.  (Isaac Mukundi of Grand Prairie, Tex., won with a time of 35:23.)  This year was better than last year, when we waited at least an hour before we were able to start pounding asphalt.  That meant that we were still standing there with people through tortillas at us while the runners were already finished.

My overall time was 2:34:20, which was an improvement of 10 minutes from last year.  I was in no pain when I was finished.  Indeed, according to my Fitbit, I accumulated a total of 21 miles of walking the entire day, beginning with my walk down to the Embarcadero in the morning, and my walk back from the Great Highway.  I averaged about a 21-minute mile, but I did much better on the Hayes Hill Challenge than I expected.  The hill has an 11% grade, and I scaled it in 12:49.61, not an easy task because many of my fellow walkers were dodging and weaving the drunks around the house parties.

The after-party was still full of energy, unlike last year’s in The Panhandle, where it had pretty much lost its momentum by the time the walkers had made it back.  The party concentrated this year around Mile 4, on either side of John F. Kennedy St. in Golden Gate Park, and featured a much broader area than The Panhandle, so people could relax, hang out, and have fun.

I had the sense to walk back to North Beach–a long walk, even if you haven’t already walked 7½ miles and then some–by another route than Russian Hill.  Hayes Hill has a steep grade, but the 27% grade of Russian Hill is much worse, especially when going down, where you’re fighting gravity the whole way to keep your legs from collapsing.

When Bay to Breakers posts the results on the Website, they should specify walkers versus runners.  Comparing a walker’s pace to a runner’s makes the walker look like a complete invalid.

Bay to Breakers specifies a walker’s corral, whereas the Capital City Half Marathon application asks your estimated finish time.  I decided to err on the side of caution and say four hours.  I think they should specify walkers’ corrals.  (I surprised myself by finishing in 3:23:51.)

The trip home was uneventful, which was great, since departure could have been disastrous.  I rode to the airport in the Supershuttle, with a driver who drove with recklessness that surpassed Steve McQueen’s in Bullitt (1968), where the chase scene took place in Russian Hill.  While on the ride, I realized my Fitbit was not on my wrist.  I went through my phone and found a picture of me in the Green Tortoise’s lobby just before I left–I was wearing it in that shot.  I was about to phone the hostel to ask them to mail it to me if they found it, but when I opened the door to the shuttle at Southwest’s drop-off point, I found the Fitbit on the floor.

After booking my suitcase, I went to my wallet and could not find my debit card.  I was about to call the Telhio Credit Union when I had the sense to look in another part of my wallet–there it was, in a different pocket than where I usually keep it. 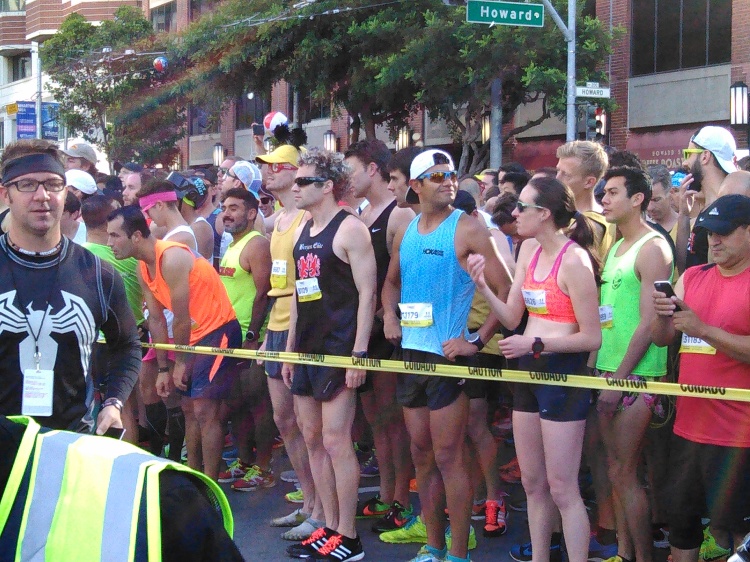 A scene repeated with each gate.  Impatient runners wait for the air horn and the splitting of the tape.